“CoreLife is life”, a friend once told me. CoreLife is, according to their website, “focused on active, healthy lifestyles.” I’m not sure I’d put myself in that category, but I do like food so I had to check it out. In concept, it’s similar to Subway, QDoba, and other quick-service restaurants where you stand there and watch your food get made. Except in this case, instead of sandwiches or Mexican-ish food, you get “nutrient-dense” bowls of food with “warm organic whole grains” at the center. Or broth. 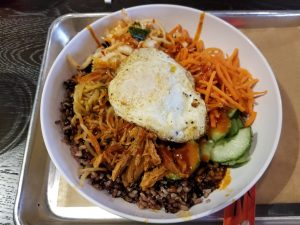 The amount of vegetables on display was pretty impressive for a place where the time between ordering and eating is a minute or two. I ordered the Korean chicken BBQ bowl. It’s essentially a fast-food version of bibimbap. In this version, the bowl isn’t hot enough to cook the egg, but that doesn’t stop it from being tasty. The portion was generous, too. I wasn’t quite able to finish my bowl despite being pretty hungry by the time I got there. Even though I felt full, I didn’t feel overstuffed and I was able to convince myself that I had what amounted to a fairly healthy lunch.

You won’t find a Coke fountain at CoreLife, but they do have a wide array of juices, teas, and lemonades. I chose the honey ginger lemonade, which claims to be good for detoxes. I don’t know if I felt any less toxified afterward, but it was a tasty drink.

CoreLife may be a chain, but it’s a little different than most of the other restaurants here in town. Even if you don’t live an active, healthy lifestyle, it’s a nice step out of the ordinary.

Your comprehensive guide to restaurants, dining, and everything food for the Greater Lafayette Area, including West Lafayette and surrounding towns. This blog was created as a way to document the places we love to eat, the ones we love a little less, and a few of the ones we never want to dine at … END_OF_DOCUMENT_TOKEN_TO_BE_REPLACED

Comments are welcome at Lafayette Eats. Having various opinions on any restaurant makes the site and reviews more useful. All comments are moderated, and will not be published on this site until reviewed and approved. No spam or advertising comments will be published. Anonymous comments will … END_OF_DOCUMENT_TOKEN_TO_BE_REPLACED