There have been a variety of restaurants at the corner of 4th and South streets. You had Blue Fin Bistro, then Lushan (both by same owners), and before that Lafayette City Grill. The newest restaurant to grace this presence in 2013 is Ichiban Sichuan. I got a chance to try it out the other day, and I was really impressed.

We went for lunch on Christmas Eve. We were seated immediately and all brought waters. The menu was long. Really, really long. Pages of entrees including rice dishes, noodle dishes, dishes of every kind of meat you can imagine and some you can’t. (Duck tongue is an option. It never occurred to me that eating a duck tongue was something that people do.) And the main menu didn’t even include the separate sushi menu. It was a little overwhelming!

Since we were there on a weekday for lunch, I decided to just order from the lunch specials menu, which was on  the last page and offered meals for just $7.50. Not only was it a shorter list of options to wade through, but it was reasonably priced. Of course, that didn’t make choosing any easier, because not many of the items had descriptions and I wasn’t sure what to expect. Without being entirely sure what I was ordering, I chose the Mongolian Sauce with Beef (number L34 on the lunch menu.)

Another friend ordered Sesame Chicken off the lunch menu, and the other two guests each ordered sushi. The menu has a sushi lunch special that includes two rolls for just $9.95. Really a very good deal on any of the lunch options.

My food was the first to come out, and I was immediately super excited that I ordered the Mongolian Sauce with Beef. It looked and smelled amazing and my sister, who ordered sushi,  immediately reach over and stole some off my plate. (Then she burned her tongue on it, which is what she gets for stealing my food.) The truth was, though, that it was absolutely delicious. I’m glad they didn’t give me a fork and only chop sticks, or else I’d have inhaled it. The chop sticks forced me to slow down and enjoy it more. (They offered forks if we wanted them.) 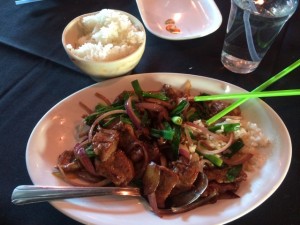 The next out was the Sesame Chicken. Sesame Chicken is pretty standard Chinese fair, so there wasn’t the question of what she was getting, but it also looked and smelled delicious. I didn’t taste it, but my friend said it was really good. 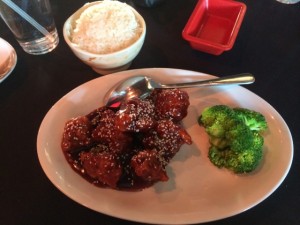 The last to be delivered to the table was the sushi. It looked great as well, and the two  people eating sushi at the table both reported it was really good. 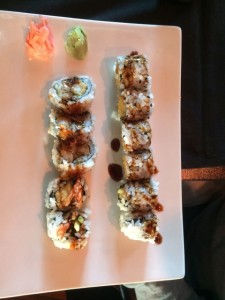 The inside of the restaurant was nice.The chairs were comfy. I liked that they have big round tables which makes it nice for large groups to dine together and keep everyone in the conversation.

It appears that you can also place orders online for takeout as well. This is something that I can definitely foresee myself using for dinners when I don’t feel like cooking.

In terms of service, I think they have a little work to do in that regard. We had to flag down someone a few times when we needed things, and our bill wasn’t split correctly. The servers were definitely friendly, and this could be chalked up to being a holiday and being short staffed. I’ll have to go again to know for sure.

Definitely, I would recommend this restaurant and it may even be my new favorite Chinese place. The prices were reasonable and the food was fabulous!

Your comprehensive guide to restaurants, dining, and everything food for the Greater Lafayette Area, including West Lafayette and surrounding towns. This blog was created as a way to document the places we love to eat, the ones we love a little less, and a few of the ones we never want to dine at … END_OF_DOCUMENT_TOKEN_TO_BE_REPLACED

Comments are welcome at Lafayette Eats. Having various opinions on any restaurant makes the site and reviews more useful. All comments are moderated, and will not be published on this site until reviewed and approved. No spam or advertising comments will be published. Anonymous comments will … END_OF_DOCUMENT_TOKEN_TO_BE_REPLACED