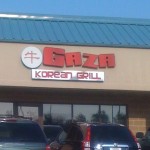 Review: The kids spend a weekend with Grandma and I can’t stop eating out! I decided that sans kids, I was going to eat at new places, especially places that I wouldn’t go with the little ones. In my quest to find somewhere new, I ran across some reviews for a restaurant named Gaza Korean Grill that I’d never heard of. The reviews were all glowing, with mentions of cooking meat right on your table. 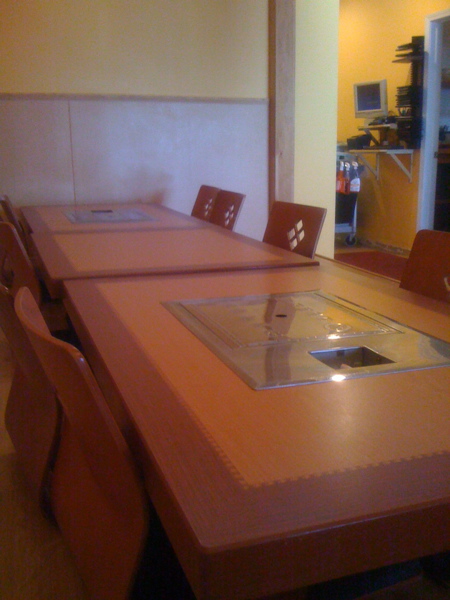 I was intrigued. So out we headed. Gaza is kind of out there, way out on Sagamore Parkway, just past McCormick. I’m pretty sure I’ve never been that far out that way before. The restaurant itself doesn’t appear to be much, just a nondescript little spot in a strip mall. Then you walk in and it’s actually quite swanky! Small, but beautifully decorated and very clean. Half of the restaurant is situated with booths and the other half has tables on what they call a “deck.” When you eat on the deck, you have to remove your shoes and sit on the floor. Technically you have a little chair, but the chair has no legs. When we arrived, all the booths were full, so we were offered to sit on the deck. Ever the adventurous ones, we happily agreed.

Upon sitting at our table, a waitress delivered us some water and offered to answer any questions. It must have been clear that we were newbies, so I asked for more information on the grill your own meat items. She was very sweet and helpful, answering all my questions and explaining how it worked. I didn’t feel like a big dork at all, which is really saying something

To order off the grill menu, you have to have two people at your table do it so we both agreed to grill so we could experience it. I ordered marinated pork and the husband ordered beef brisket. On the table we were equipped with a large spoon and a set of chopsticks for eating utensils. I’ve never claimed to be a master of chop sticks, but I was determined not to ask for a fork. We were given salads to start, after which our traditional Korean sides were delivered. The sides were seaweed, bean sprouts, kimchi, and something else that I can’t remember the name of but was so spicy I quickly downed my entire glass of water. I did try them all, favoring the sprouts and seaweed, but I opted not to eat any more of the side dish I nicknamed “pain!” 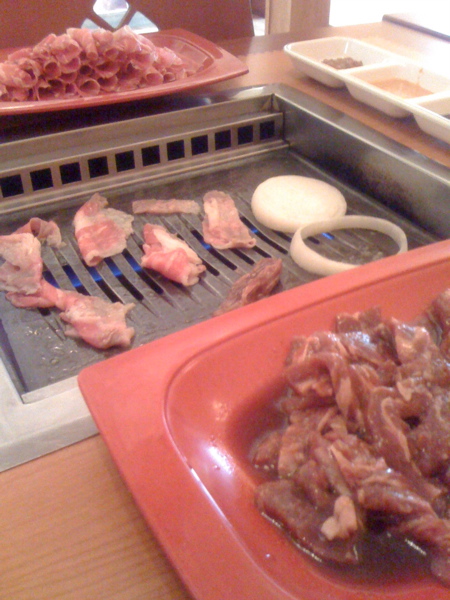 Next, our meat was delivered. These were huge heaping plates of meat, and we didn’t even order the unlimited meat meals. The waitress started our grill for us, gave us some directions, and we started grilling. We were also given a tray with four grilling sauces and a bowl of rice each. Apparently you grill your meat, dip it in the sauce, and then toss it onto your bowl of rice and eat

So we immediately got to work cooking our meats, and it was a very good and filling meal. The meat was tasty, the sauces were good, and the process, though difficult at times with chop sticks, was quite fun. I wouldn’t want to go there every night, but it was a fun place to eat. The only downside was that they do not serve alcohol.

Methods of Payment: Cash or Credit.

Your comprehensive guide to restaurants, dining, and everything food for the Greater Lafayette Area, including West Lafayette and surrounding towns. This blog was created as a way to document the places we love to eat, the ones we love a little less, and a few of the ones we never want to dine at … END_OF_DOCUMENT_TOKEN_TO_BE_REPLACED

Comments are welcome at Lafayette Eats. Having various opinions on any restaurant makes the site and reviews more useful. All comments are moderated, and will not be published on this site until reviewed and approved. No spam or advertising comments will be published. Anonymous comments will … END_OF_DOCUMENT_TOKEN_TO_BE_REPLACED